Peter O’Connor’s silver medal has largely been forgotten, but his 1906 triumph represented the Olympic games at its best.

O’Connor won silver in the long jump event, and he was widely expected to stand on the podium under the blue and red of Britain’s Union Jack. Being the athletic lad that he was, and a supporter of Irish independence to boot, he failed to meet those expectations. Instead, he climbed a flagpole and waved an Eire go Bragh flag. While he scaled it, one of his teammates guarded the pole.

Irish freedom was another 16 years away, but this flagpole sitta – hat tip to Harvey Danger – was one the first sportspeople to use his Olympic platform for something meaningful. In later Olympiads, issues as diverse as the events in the Games themselves would find an outlet, from apartheid and Black Power to shining a light on Tibet.

Now, it’s time to jump into the story; pun very much intended.

Sport loves nothing more than a narrative – it sells newspapers, drives brand-building for athletes and it gives fans something to feed on between competitions. Derek Redmond’s pertinacity in Barcelona’s 1992 Games – when he pulled his hamstring but hobbled over the line with his father – is genuinely moving. Even if people on YouTube insist on scoring the footage with Coldplay’s Fix You. Or with some other cheesy knockabout pop hit.

And every four years, pundits shove the wholesomeness of the Olympics down our throats. These amateurs – and they do deserve a lot of credit – are held up as moral examples in order to shame footballers or other professional athletes. However, sport is a business. The countries that invest more money generally bring home more medals.

For Tokyo 2020, a range of stringent guidelines has been announced. For instance, political messaging, including kneeling or hand gestures, have been prohibited. The proviso is that this measure will make the Games focused solely on the sporting heroes, yet it doesn’t hurt the sponsors either.

It is my personal view that politics and sport cannot be separated. Aside from ideology, such a division simply isn’t practical, and the history of the Olympics has given us heroic figures on and off the winners’ podium. From 1964-1988, South Africa was ostracised and banned from the competition. Apartheid was officially dismantled in 1991, and sporting pressure like the Olympics ban played its part in this process. 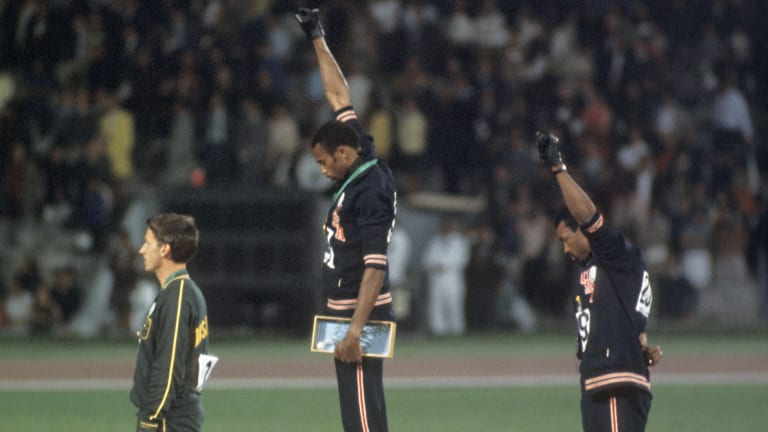 In 1968, sprinters Tommie Smith and John Carlos stood with their fists, wrapped in a black glove, raised to the sky. Australian runner was beside them, donning an Olympic Project for Human Rights badge. They were demonized for their Black Power gesture, yet their dignified protest showed a rare form of courage.

The American media dubbed O’Connor the ‘Irish antelope’. He began jumping as a child from the backdoor step of his house. The Irishman eventually joined the Gaelic Athletics Association and became a world-famous athlete. He even held a couple of world records. He won many races in England; the Meath Chronicle proclaimed on one occasion that he had ‘whacked the Saxons on their own ground’.

O’Connor and two other Irish athletes travelled to Athens in 1906. Their plan, as evidenced by their green blazers and shamrocks, was to represent Ireland. To their annoyance, in Greece, they discovered they had been incorporated into the British team. As a colony, Ireland did not have its own Olympic Committee.

According to Matthew P. Llewellyn’s Rule Brittania, O’Connor was encouraged to make an official complaint. Pushed by sympathetic Irish-Americans, O’Connor’s plea reached the Prince of Greece. Unfortunately, the royal dryly concluded that Irish flags would only be allowed if Ireland was a free nation. Simply put, the Olympic committee did not wish to make a powerful enemy by alienating the British.

Not for the first time, international opinion sided with the Irish, with one New York paper prophecising Irish freedom was close at hand.

As a matter of further insult, the British media repeatedly referred to the athletes as English. Equating Britishness to Englishness is still a problem today. This reportage is even more frustrating when you consider that Ireland, as a colony, was never really British. Irish papers were apoplectic, with even the pro-English Irish Times moved to register their shock at such brazen appropriation.

O’Connor faced another hurdle. The judges for the long jump was the coach of his American rival, who ended up taking the gold. Thus, O’Connor’s fears of bias seemed to have been justified. The Irishman, fresh from flying the flag, won the triple jump. Despite winning the gold, it was his action after winning silver that cemented his legend.

Unfortunately, his medals are no longer seen as valid. The 1906 games are not considered part of the Olympic series anymore. Regardless, we’ll claim the moral victory.

In 1956, the 1500m men’s final saw Ronnie Delaney kick hard in the last lap. He ran the final 300 metres of that race in thirty seconds, outpaced America’s famed John Landy, and took gold for Ireland. Sonia O’Sullivan, Michael Carruth, Katie Taylor and Annalise Murphy have all won medals for their country. Pat O’ Callaghan won the men’s hammer throw in the 1928 and 1932 Olympics; he was the first medalist to stand on the podium under an Irish flag, and in typical Irish fashion, he had secured his medals at the death, with his last throws.

The O’Donovan brothers won silver for rowing at the 2016 Olympics.

In the past year, Ireland has rejigged its approach to athletics and other events, and we’re starting to reap the rewards. New Zealand, which is a country of comparable size and population, remains streets ahead in terms of their elite development structures. Nevertheless, it seems that Ireland is turning a corner.

If we lift gold, silver or bronze in Tokyo, we shouldn’t forget Peter O’Connor. His flag-waving represented the will of a suppressed nation to find its own way in the world, including the world of sport. And to keep the International Olympic Committee happy, by focusing purely his sporting achievements, he helped pave the way for the generations of Irish athletes that have followed since.

For more sporting knowledge, check out our piece on Irish basketball player Pat Burke. Listen to our podcast for more cultural pieces, and head to our online shop for some literary-inspired fashion.