Beard History: a gift of nature from Ireland to India

A beard history can include many episodes, including one of my brother’s most baffling moments in life, judging from how vividly he remembers and recounts the story. It happened when he was a teenager.

He was at the receiving end of a sententious statement while arguing with my father: ‘What would you know anyway! You’re an imberbe! My father wanted to have the last word and he definitely succeeded; his son walked away from the argument in shock.

In fact, he also walked away to check the dictionary. It turned out imberbe meant ‘beardless’. Beards, of course, bestowed adulthood on males, and with it, the capacity to make reasonable (even legally acceptable) decisions, and of being worth listening to.

Spanish isn’t the only language to establish this association: the English word ‘callow’, a formal adjective used to describe someone immature, comes from Medieval English calu, which was likely influenced, in turn, by the Latin calvus, meaning ‘bald’, ‘hairless’.

In the old days, having a beard could make or break your status in the community; it had an impact on your ability to fight a battle successfully, not least because it determined whether your opponents considered you worth fighting against.

Even Ireland’s most important mythological figure, demigod Cú Chulainn, was dismissed by his enemies during fir fer (manly and heroic battle episodes) because of being ‘beardless’. Luckily, he was resourceful enough to make himself a beard out of blackberry juice (enchanted grass in other versions). His enemies were understandably fooled by the trick.

The botanical associations of beards are not only present in this story – where Irish mythmakers make sure to highlight it was a woman’s idea for Cú Chulainn to smear berries on his face – but they are also a key element of Norse mythology. West Cork Beard Company’s best-selling oil is described as ‘masculine and energising with a subtle forest scent’ but, once upon a time, it was the beard itself that was the forest.

Skaldic verses describe how all trees in the world were made out of the giant Ymir’s hair. Although they do not mention his beard specifically, given that Njál, an old Norse-Icelandic hero, shared Cú Chulainn permanent case of ‘bad hair’, we can assume that it was all of Ymir’s bodily hair that composed the world’s flora.

Cú Chulainn and Njál’s ‘problem’, as the subject is alluded to in mythological texts, is not an outdated issue: nowadays beard transplants are on offer for those who are not able to grow the much-sought-after ‘encircled beard’. This distinguished a man from an imberbe at the dawn of Irish times. 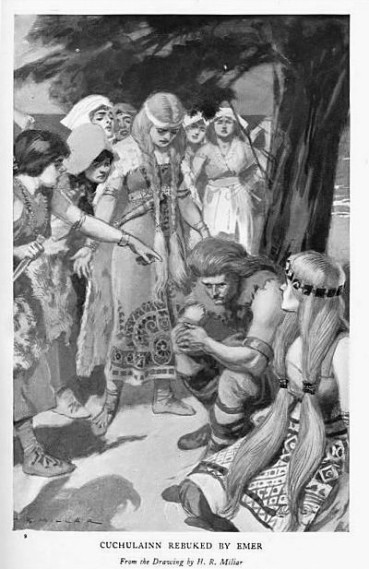 Cú Chulainn being rebuked by Emer, as if he did not have enough problems

Beard History 2: The Beard Battle to Populate the World

Nowhere is the extent of the beard universe better expressed than in the Spanish word for a ‘bushy’ beard, poblada, which translates as ‘populated’. So populated, it could hold a whole empire behind it, as Philip II’s beard did in the time of the Spanish Armada.

Admiral Drake (known as pirata Drake in Spain) decided to launch an operation to destroy the Spanish flotilla in Cádiz when they were preparing to head towards England. When the Englishman alluded to this operation as “Singeing the Spanish King’s Beard”, he was not just referring to attacking the Spanish in their home ground, but also mocking his virility and strength in the process.

Indeed, if we think of populated, vibrant forests, it will be easy to imagine brown, red and all shades of hair-like vegetation. World folklore does not lack in names given to plants which refer to beards: the so-called Spanish moss (Tillandsia usneoides) is referred to as ‘grandpa’s beard’ in French Polynesia and known in other areas as ‘beard lichen’.

Hair colour is determined by genetics, but the processes in different parts of the body are independent, resulting in large numbers of individuals whose beard colours do not match the top of their heads. Not only that, but red beards or, at least, red beard hairs seem to be fairly common across dark, red and fair-haired men, for reasons unknown. 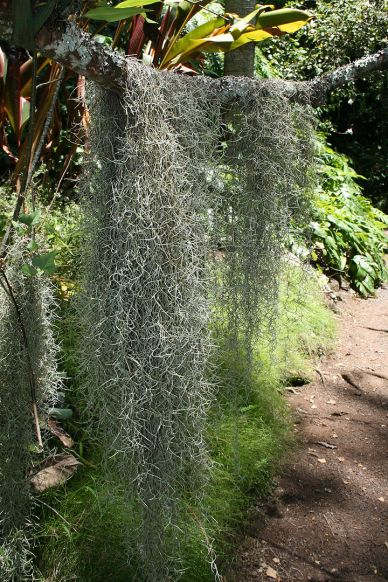 If beards feature all across nature, it is not that shocking that they should transcend it. In Kathakali, a form of ancestral south Indian performance art which involves elaborate make-up and props, performers sport red, white and black beards. Each one of them follows a strict colour code which represents a unique character, be it a monkey, a forest hunter or a chief demon. When it comes to she-demons, black covers the whole face.

Western culture is not alien to physically non-conforming characters: The Beard Lady forms part of the vast array of misfits and social rejects that formed part of the Victorian ‘freak show’, a much less healthy entertainment than that provided by Indian tradition.

But beards have not always been appreciated all across the globe. While in some religions it is still forbidden to shave, in Western culture a shaved face has often become a synonym of respectability and cleanliness, to the point that some job descriptions include the prohibition of sporting a beard.

Beards have even been accused of being great means of transport for germs – even coronavirus. In fact, the cuts from shaving are much more prone to getting infected than a healthy beard is, just as plant wounds are most susceptible to pests immediately after pruning.

So, the next time you see a bearded man or drink blackberry juice, spare a thought for this historical fate-determining gift of nature.

Check out our interview with the one and only Irish beard expert, Colin Murphy. We’re not selling beard trimmers yet, but we promise you will look trim in our trendy t-shirts. And if you want to hear more about Indian performance arts, listen to this podcast.

Thank you for reading about beard history!